'The Snake Had His PhotoShoot!'

Its been awhile.......  but i bring you good tidings!  Hubby is doing well... Sometimes he tries to do too much and pays for it that next day with not feeling well.  He went to his first session of cardiac rehab...  As much as we both agree this will increase his quality of life... he REALLY hates to exercise.. Hate is really not a strong enough word.... We got there about an half hour early... big mistake... i could just see his mind working .. fighting the urge to just walk out.. I'm so glad he stayed... Who knows maybe they can change his mind.. lol 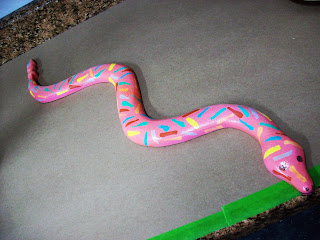 I was shocked to actually find a 'before' picture of my snake.. So so glad i took one..I found him at an Estate Sale for $4. He had a cracked tail so i thought i paid too much anyway but i saw the possibilities... He is solid wood.... 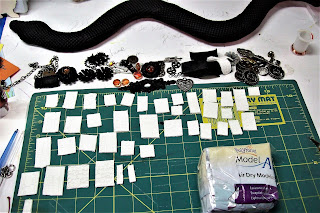 I used found embellishments and ones i created myself from air dry clay... I rolled out some clay and used a broken panel from a fluorescent light to give him that snake skin texture...then wrapped it around the snake... worked like a charm.. Painted him black.. painted everything i used with gesso then black paint.. All those little squares are air dry clay that i used various things to make impressions.. 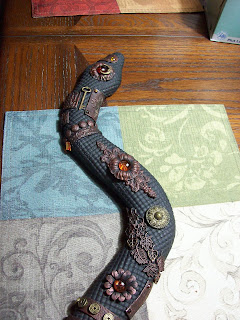 I used everything from tacks to the little flowers off hummingbird feeders , some bits and bobs from the house remodel.. 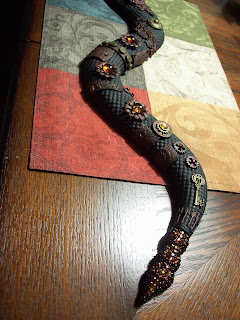 Re-purposed buttons... keys... glass gems.. beads... Most of the time was spent decision making... trying out new configurations before gluing it down.. 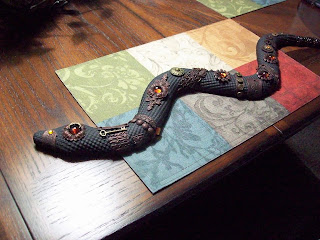 Gluing things down was difficult.. It was so final... Once i glued something down there was no changing my mind... lol 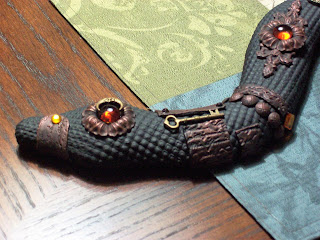 Some of the pictures i took came out blurry so these are the best of the best... 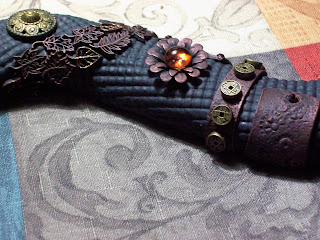 My initial idea was to make him an 'armored snake'... i think i achieved that somewhat.. but i think he needs more armor.. more of those little squares.. 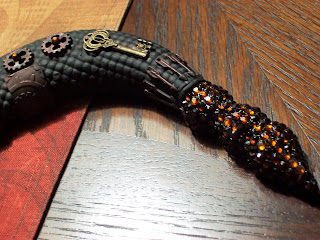 The air dry clay turned out to be a little difficult to work with..  i needed to prebend the clay before it dried so it would lay nice on the snake.. Dried clay is flexible but breaks easy when you bend it too far..  Frustrated i just decided to go with a few pieces.. 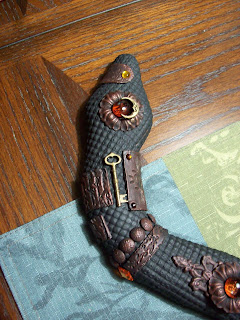 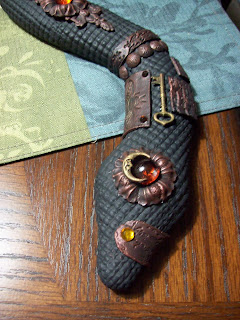 This was so much fun .. even if it was time consuming. My favorite part is the head... Love the strap across his nose and the gem on his head..   i love the whole transformation... Take care and thanks for stopping by!! I hope everything is well in your neck of the woods.. Hugs! deb
Posted by jinxxxygirl at 5:37 AM

Most impressive, Deb. I like the texture. It looks right, too. Maybe he's a steampunk snake. He puts off that vibe.

I've never worked with air dry clay, so I can't offer any tips for using it. However, it looks like you managed quite well, even with all your setbacks. It's also good to see you back in blogland.

I love it, Deb! The strap across his nose makes him seem totally safe--can't bite--LOL! Really dramatic! :)

The snake is absolutely fabulous, Deb!!!! It looks sort of steampunk. We used L-shaped screw hooks to display our wooden rain snake on the wall. The two curves of your snake would fit nicely, I think. Gosh, you did a beautiful job. I bet you could sell your $4 snake for $50 easy.

My hubby is like yours about exercise. "Hate" is not a strong enough word for him either.

Aww, you put my postcard in your header. I'm honored.

Love the snake. Is Deb. Looks great.
Stand your ground with hubby and insist he go for his rehab...,if he resists just tell him he has to go because you are not ready to be a widow,.,that might get his attention.
My hubby has to go for an angiogram Wednesday...,the cardiologist found a blockage and an irregular heart beat when they did the stress test last week. He’s a bit nervous. He’s never had anything more serious than a cold and flu in almost 80 years, hard to believe he has a blockage with all the exercise we get and our healthy diet...but hereditary..one thing you can’t change.
Glad to see you are getting some art work in too.,,it’s great therapy.

I've grown to appreciate exercise as I become more and more motivated to avoid frailty in the future. I guess I see it as a duty I've come to enjoy.

I love the snake!

jinxxxygirl
NorthWest, AR - Arkansas, United States
I'm a 53 yr old woman learning that its okay to just be me. That i'm alright in every sense of the word. That i can own many of the labels that are applied to me like.....shy, quiet, loner, weird, strange, odd, different, and i can accept them and embrace them as being a part of me. They are not something i need to fix. I'am learning to just breathe and this is my journey.